Take a look at someone sitting on the SHSH price.

This stock is as cheap as it gets. Someone can load the boat here cheaply.

Take a look at these CFTN monthly charts. These are about as pretty as can be. 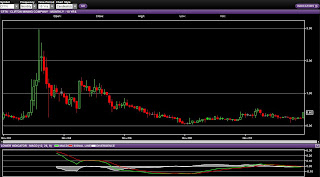 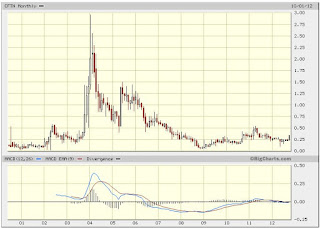 Would be awesome to see a repeat of the run to around $3.00 per share back in 2004 at a time when Cliftons prospects weren't nearly so promissing. :)

This is HUGE news for Clifton Mining Company. They have been working on getting this project going for 10 or 15 years now and finally it is happening.

Here is a portion of the letter from Utah Mining Division that was issued yesterday: 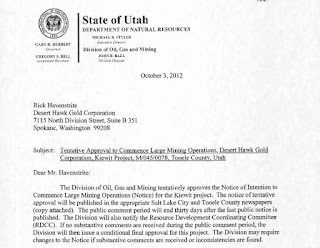 US Is Debt Addict on 'Budgetary Crystal Meth': Gross

Stocks and bonds will be virtually worthless and gold and hard assets will be the only investments worth having unless the U.S. tames its addiction to debt and deficits, Pimco's Bill Gross said Tuesday.

This is pretty hard hitting stuff from one of the most respected main stream guys, Bill Gross.

Wow - Jim Sinclair Posts A Whopper - What Can You Say?

You need to read this from Jim Sinclair's website www.jsmineset.com.

Hi Jim,
I totally agree with both of you that the Euro is an experiment to weed out the bugs for the grand experiment of a NWO currency.
First the US dollar falls from its global reserve currency status. Then regional reserve currencies are put in place to compete equally with the Euro.
This could be 7 regional currencies comprising of:
These seven currencies would then meld into one electronic currency that no one can buy or sell lest they have the mark to activate an account.
CIGA Rob

Email ThisBlogThis!Share to TwitterShare to FacebookShare to Pinterest
Labels: Mark of the beast, new world order, NWO, One World Currency

Caledonia Mining Corporation is a gold mining company with other base metal assets.

It looks like Caledonis is at a very tough overhead resistance at a long term down trend line.

I found this chart from a post on RagingBull.com

In the response, it is stated that Desert Hawk Gold has conducted individual working sessions with DOGM staff personnel in order to identify and address each specific comment and to agree on specific revised text and figures which are acceptable to DOGM.

Clifton Mining firmly believes that the Kiewit project will be its most profitable project once permitted.

Take a look at this long term chart of Clifton as of October 1st, 2012.

Here is the actual response: 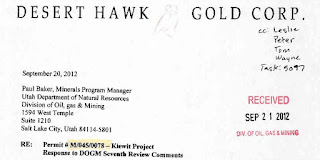 Back in March, 2011, Clifton Mining made the following announcement:

“Filings have been made with government agencies to construct a large heap leach pad
near the Kiewit properties. This pad is being engineered to accommodate not only the
gold resources from the Kiewit properties, but also silver and gold material from
surrounding mine sites. It is anticipated that the government approval will be granted
later this year and that construction will begin thereafter. We expect this to be the largest
and most profitable project for the Company.”

I have spoken with a key executive involved with the permitting process and it appears from our conversations that everything is full go with regards to the Kiewit permitting process. In fact, it should be happening any day now.

Previously, Clifton Mining Company's (Clifton) joint venture partner Desert Hawk Gold Corp.
(Desert Hawk), completed the overhaul and renovation of the Gold Hill mill in
September of 2010. Preliminary mill operations started in October, with fine tuning of
the mill over the past several months. New crushing and grinding circuits have been put
in place as well as additional banks of float cells and new gravity separation tables,
upgrading capacity and recoveries. A new automated crusher has been placed at the mine
site so that ore can be crushed before being shipped to the mill for processing.

Clifton Mining company is structured like a royalty mining company. Clifton has a partner in the project, Desert Hawk Mining company, that is in charge of all funding, permitting and production. Clifton Mining Company gets to sit back as its property is developed and brought to production without risking any money of its own. Clifton has kept its outstanding common stock issued to a very low level and has not diluted it like so many other mining companies have done. In 2003, Clifton had 50 million shares outstanding. As of December of 2011, there are only 56 million shares outstanding.

Some people think that the Clifton Properties may contain up to 1 billion ounces of silver. Clifton Mining however is not 43-101 compliant and the estimates are not confirmed.

It took Clifton management 30 years to secure up to 100 patented mining claims in a high grade historic mining area to create one contiguous block of claims. The claims were owned by as many as 100 surviving descendants of the original miners.

With silver and gold prices rising in the face of massive currency debasement around the world, Clifton Mining is well positioned to capitalize on the royalties that will be produced from its partnership with Desert Hawk Gold. Clifton will realize a 5% net smelter royalty on all gold production from the Kiewit zone.

Recently, Shoshone Gold & Silver Mining Company attempted to do a joint venture with Desert Hawk Gold and here is what they had to say: Shoshone stated: "We believe that this property has the potential for very significant early production and cash flow from the permitted mill, as well as from the gold heap leach. Additionally, multiple exploration opportunities for expanding the gold, silver, copper and other mineral resources are abundant. In sum it would be very difficult to find a comparable opportunity in the western United States. Mining properties of this quality and grade were discovered and mined long ago."
Clifton Mining company is trading at an unbelievably low price of $0.25 per share. This is lower than it was trading when the price of silver was $8.00 per ounce. Silver is now trading at $35.00 per ounce. At this price, I believe CFTN shares are a literal steal.

*** Disclaimer: Clifton Mining Company is a penny stock. Penny stocks are risky investments but can have absolutely huge payoffs. I own shares of Clifton Mining. If CFTN shares go up in price, I will benefit from that. Do your own due diligence before buying this stock or any other investment, after all, it is your own money. I am not an investment advisor. ****
Posted by News Wire at 11:20 AM