The Lion That Never Roared (CALVF)

This beast of a stock has been a thorn in my side for years now. I have owned Caledonia Mining Shares for many years and have always hoped it would grow and prosper and make me rich. Instead, I have watched it remain dormant and even go lower in price over the many years I have held it. I once thought that the main pressure holding the stock down was the uncertainty of the Zimbabwe situation with indigenisation. I thought that once the indigenisation issue was settled, the value of the stock would increase with the uncertainty gone. Well, now that the issue has been settled and Caledonia has agreed (under threat of force) to give 51% of its Blanket mine away to Robert Mugabe (head thug in Zimbabwe), the stock has done nothing. I made some bold predictions about a massive price spike based on some long term charts. But the rocket ship ride I envisioned failed just like the recent failed missile test in North Korea.

The price spike did not materialize and now we are left to wonder just what will become of our little known company with too many shares outstanding and half a gold mine in Zimbabwe...... 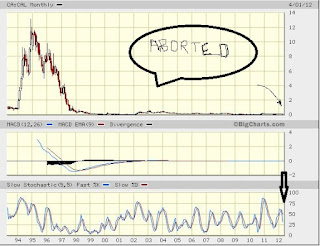