Caledonia Mining Corporation operates the Blanket Gold Mine in Zimbabwe. This is a highly profitable gold mining operation that many would argue supports a much higher share price for CALVF than currently exists. Caledonia Mining common share price has been held back by one big thing. The big uncertainty of course being the unknown outcome of the Zimbabwe Indigenisation laws that require Caledonia to hand over the majority of its ownership of the Blanket mine to the Government thugs who are trying to steal it from them using a controversial and completely gang like law.

And so, with that said, I am now asking is this agreement about to be reached? Will the uncertainty surrounding the ownership future of Caledonia finally disappear? Now as some of you may know, I have written many times about Caledonia and a particular pattern that I have been expecting to repeat. This is what I have predicated my predictions of future share price, timing of share price and now today, the ultimate resolution of the indigenisation fraud that the Zimbabwean govt. is attempting to facilitate.

Anyway, first let's look back to a chart that I created back in February of 2011 and reposted in a post called


For Caledonia Mining Company Is It Now Or Never (Part Deux)

Here is the chart:

As I mentioned in that post, the data used to create this above chart is no longer available as Big Charts only provide about ten years of CALVF data for some reason now.

But..... I have once again created a new chart of Caledonia Mining to show where we are and it seems this above pattern is still in play, and even better, we are on the upswing of heading toward the #2 price objective.

Now let's take a look at the current chart: 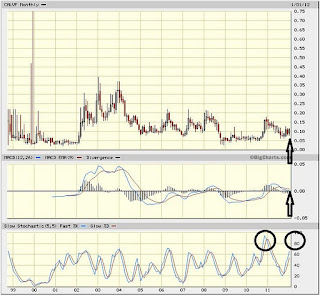 It appears that CALVF is about to make its move to much higher levels this year.  I am once again predicting that Caledonia's share price is ready to explode. I have waited quite patiently for this to play out and it looks like this pattern still has the possibility of creating a massive price explosion.

Disclaimer: I am not an investment advisor. I am not offering investing advice. I own CALVF and have for many years. I stand to gain profits if the price explosion occurs. Do your own due dilligence before investing in anything, especially a risky penny stock like Caledonia Mining that has a large number of outstanding shares and has a gold mine that is being threatened to be stolen by the Zimbabwean government.