Are We Nearing The End Of The Silver Gold Ratio Correction?

Sometimes things just don't "feel" right.  Like the fact that most people do not view silver as money.  The fact is that throughout history, silver has always been used as money.  More so than even gold.  So how could silver get pushed so far away from its monetary roots?  That is a story for a different time and place, but for the moment, it appears that we are approaching another point of inflection where by silver is going to resume it's move toward a monetary metal and hedge against systemic failure of a doomed fiat monetary system.  Do you really trust holding all of your "money" in a bank account of electronic digits that are being continually debased by fiscal imprudence and outright theft by electronic currency printing thanks to Big Ben Bernanke and his state of the art electronic printing press?

Take a look at this chart of the Silver Gold ratio which shows the value of silver in terms of gold.  As silver was running up from $5 to $50, the correlation between MACD to the Silver:Gold ratio was astounding.  In fact it was almost perfect.  But a funny thing happened since silver was smacked down with the collusive raid on paper silver prices by the corrupt CME who raised margins over and over until they got sufficient downside price manipulation in the paper silver market.

That funny thing is that the MACD went down much further than the ratio of SLV to GLD.  In other words, it looks to me like the ratio of Silver to Gold price did not confirm the much more dramatic drop in MACD for the same period.  This suggests to me that the silver to gold ratio is not looking to continue downward with gold prices outperforming silver prices in terms of fiat U.S. shit Currency also known as Federal Reserve Notes.  I call them FRN's.

With this I now see a good chance that silver will once again begin to outperform gold as gold rises against the trashy U.S. Dollar and Silver rises against gold and the dirty dollar. 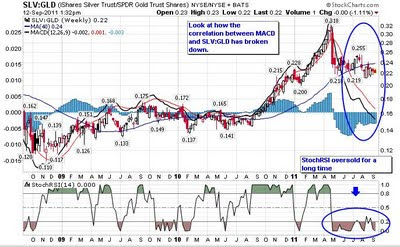