Is Silver To Gold Ratio About To Resume Uptrend?

Is it finally time for silver to start outperforming gold again?  I'm not a technician, but it looks like this formation needs to break one way or the other soon.

The PPO on the top of the chart is moving up while the silver price has had a downward tendency, this non confirmation makes me thing the the price of silver in terms of gold may be ready to head higher soon.  (Of course this formation may break down and gold will outperform in that scenario).

It just looks to me like the chart is coiling like a spring ready to be set loose and very soon.  All silver investors will be very interested in which way this ratio heads as it will impact the price at which silver trades. 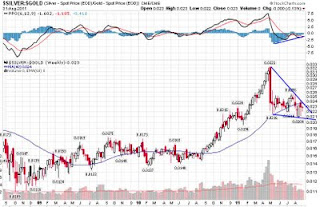 Silver : Where Are We Now?

Let's keep some perspective when looking at the price of silver.  Many people have grown increasingly frustrated that the silver price has seemed to be stagnant recently.  Gold has been rocketing higher and has been gaining all of the recent attention.

For a little bit of perspective, let's remember that over the past year, while the price of gold has risen an astounding 46%, silver has risen 114% during this same time period. 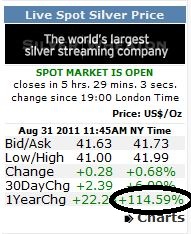 What is happening right now is just that silver is taking a little breather. It ran up so quickly from $18 to $50 that it is now consolidating its gains. It is trading right now at $41.68 so it really isn't too far off from challenging its all time nominal high of $50 U.S. Federal Reserve Paper Fiat Notes.

More importantly, all of the reasons that you would have purchased silver at $18 or $28 are still valid today. Take a moment to watch this video on why silver is such a good investment right now.

The world is changing quickly and will never look the same. Are you ready to preserve and even grow your wealth as the western world continues to decline?

Got Silver? Got Gold?

Silver to Gold Ratio Getting Ready To Resume Uptrend

The silver to gold ratio more than doubled as silver rose from $16 to $50.  Then the CME came in and hiked silver margins repeatedly in conjunction with JP Morgan selling massive amounts of paper silver into the market until they got their desired result which was knocking the price of silver down from $50 to $32 in a very short time frame.

Since that time, gold has become the star of the show and all eyes have been focused upon the golden boy.  Meanwhile, silver sits quietly in the shadows garnering little fanfare or attention.  This is all well and good as the silver to gold ratio looks to be slowly ending its counter trend move and prepares for its next move up.

Here is the daily Silver:Gold ratio chart:  Notice how it has formed a down sloping penant formation.  Also look at the PPO on top which has not confirmed this downward bias. 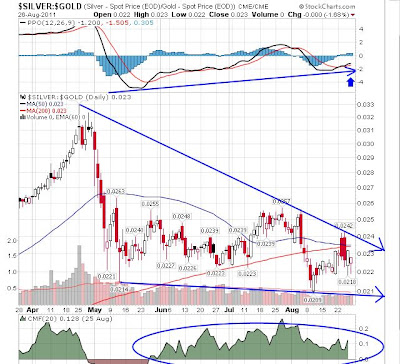 Now take a look at the same Silver to Gold ratio chart only this is the weekly version: Notice how the slow stochastic is extremely oversold and has been for a while.  It is now starting to creep slowly higher.  You can see the same penant formation on the chart and also notice that the MACD has now worked off its overbought condition. 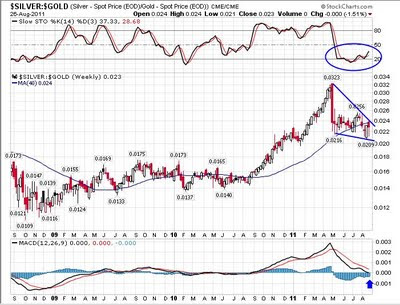 So as all eyes are glued to GOLD, silver is percolating in the background, building its new base to launch higher from.  Got Silver? Got Gold?

No More Margin On The Comex For Gold And Silver

I want to point out this VERY important quote from Jim Sinclair's website JSmineset.com.

"Before gold and silver reach full valuation the Comex will have increased margins to CASH only, 100% margin, paper ETF delivery."

I think this should give us all faith in the fact that gold and silver are still extremely undervalued.

So Silver, What's It Going To Be? Industrial Metal or Monetary Metal?

With gold skyrocketing higher, many silver investors are scratching their heads at the underperformance of their favorite grey metal, silver.  Silver has been subdued to say the least in contrast to gold while the stock market has been hammered lower and gold has gone as high as $1799 U.S. Fiat Federal Reserve notes today, silver finally is starting to show some life.

In fact, silver is up 4% as I type this.  Not too bad I would say on a day when the DOW IS DOWN hundreds of points once again.  I was watching a video from Bix Wier and he was saying that the real battle right now is in the silver market.  Bix says silver has the ability to bring down this current financial system by bringing down JP Morgan Chase who does nothing but short paper silver continually.

Max Kieser always said that the end would be near once the price of silver exceeded the price of JPM stock convincingly.

You probably already know that Jim Sinclair, who Turd calls Santa, made it quite clear in his recent interview with James Turk of Gold Money Foundation, that when Gold clears (and stays above) $1764, it would begin an exponential move higher.  This seems to be happening right now as I mentioned that gold traded as high as $1799 today and is currently sitting at $1776.  Hey, 1776 is the year of our independence right?  What independence?  It looks like they captured us again huh?

At the moment, it looks like the banks will try to close gold lower than it is on the day, I believe it is $1775 they are defending, which gives them an $11 cushion above Jim's price of never never land.  Just as I am typing this gold has been pushed back down to $1771 so this is of course an epic battle.

People around the world seem to be quite on edge as LONDON IS BURNING AND GOLD IS SOARING.  Now if you haven't seen this, check out the new video by ANONYMOUS.

They are threatening to TAKE DOWN FACEBOOK on November 5, 2011.  Seriously, things are strange huh?  I think silver owners need to continue to stack the physical metal and be patient as this consolidation phase in silver could end at any moment.

Silver is such a tiny little market that is completely dominated with illegal paper short selling but stocks continue to go lower and most silver holders are silver hoarders.  They won't be scared out of their physical positions by paper games on the increasingly insignificant COMEX (Better Known As The CRIMEX).

Don't expect any help from the losers at the CFTC as they have already shown that they are puppets to the bankers at JP Morgan as is our own Congress and President.

As things continue to deteriorate globally, and the massive amounts of debt continue to haunt the financial system, take refugee in your Silver and Gold and you will be duly rewarded. 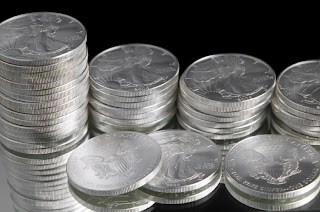 Interview With David Morgan On $5.00 Silver

David Morgan: "It is getting more difficult to predict what the market reaction will be to specific events. As people figure out that there really is no solution to the global financial system without a great deal of pain and some defaults along the road, more will seek the safety of precious metals. So, even when things calm down for the moment, it does not mean the precious metals will not get pushed down. You could see gold and silver react to the downside, perhaps dramatically—$5/ounce (oz.) silver is not entirely out of the realm of possibility. My best guess is we will see some pullback going into mid-August.

Is this for real? Is he smoking crack? I don't know but that type of volatility would be UNREAL!!!! To be sure silver is the most volatile metal.

Jim Sinclair said it best, "Volatility, thy name is Silver", but really, seeing silver at $5 per ounce would be pretty damn amazing considering where the world is now as compared to where is was when silver was last trading at $5.00.

I guess if Silver is correcting back to $5 in the next two or three weeks then gold will be going down to $325 or so?

Links to this post
Email ThisBlogThis!Share to TwitterShare to FacebookShare to Pinterest
Labels: David Morgan Five Dollar Silver In August, David Morgan Silver At $5.00 Per Ounce

Jim Sinclair, who called for $1650 gold when it was $325 per ounce, talks about where we are now and where we are headed. You owe it to yourself, your family and your loved ones to watch this ten minute interview. Got Silver? Got Gold?

Eric has well founded arguments as to why silver is going MUCH higher. Paper sellers be damned (eventually). The silver market is so highly manipulated with paper short sales and short derivatives that there is no possible way that actual physical silver could ever be delivered against all of these short positions.

The silver market is tiny compared to the gold market and therefor it is easier for the goons at JP Morgan, etc. to pull off their silver raids with great effect in downward price over the short term.

In the long term, the paper market will be overrun by the physical market and when this happens, silver will finally be a free market.

This weekly silver chart shows a pennant formation that I expect will eventually resolve to the upside with some serious fireworks. 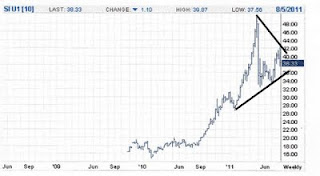 Until then, keep stacking your physical silver and don't play with paper silver or you will probably get burned.

I Have Become Comfortably Numb In The Silver Market

Lately the price of silver has been affecting me.  I mean it really has an impact on my vibration at times.  Watching the silver price go from 5 to 50 and then to 32 and now all of this recent volatility with down days like today always being extreme, what am I to think?


When I look at this chart it just makes me question everything.... well, kind of, but not really that much. You see I have become comfortably numb... that is to the daily machinations of the manipulated silver market. The market where they seem to be slowly loosing control, but still able to massively manipulate short term price. 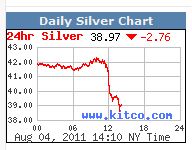 This U.S. Federal Reserve Note price of silver is quite volatile to say the least. Silver held up quite well along with gold for the longest time today and then suddenly, it didn't and the result was a 9% decline in price from the high of $42.29 to the low of $38.47 in one trading session which is really a very short period of time.

So this "massive" sell off (it really is BIG) is just one more highly manipulative, paper leveraged sell off of my favorite white metal silver. Although it does pain me so, what should I really expect in these uncertain times.

But for today I will slip into a comfortable state of waiting as I have been conditioned to do during this wonderful, yet volatile, bull market in silver ............ and gold.
Posted by News Wire at 10:09 PM