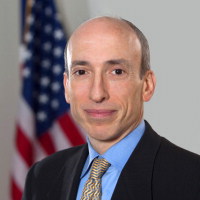 Gary Gensler, Chairman of the U.S. Commodity Futures Trading Commission, blamed higher prices of commodities on speculators as he is pressured to bring down the price of crude oil by the Obama administration.
Gensler wrote in response to a May 11 letter from 17 senators seeking a CFTC plan for curbing crude-oil speculation.
This is a TYPICAL REACTION from one government agency working in conjunction with another government agency to alter free market prices in commodities that they feel would be beneficial for their own purposes.
This is also a great way to KEEP THE PUBLIC IN THE DARK ABOUT THE TRUE REASON FOR PRICES GOING UP, NAMELY QUANTITATIVE EASING, OR FIAT MONEY PRINTING.
It seems that the high oil prices prompted the phony congress to write to their cronies at the CFTC asking how they could manipulate the prices lower.
LET US ALL REMEMBER THAT IT IS NOT THE CFTC'S JOB TO RAISE OR LOWER PRICES.  IT IS THEIR JOB TO MAKE SURE PRICES ARE NOT BEING MANIPULATED ILLEGALLY.
Bart Chilton appears to have been taken over by the dark side as well.  Chilton who originally came out and said that he was certain that Silver prices had been illegally manipulated, has now gone completely silent on that issue.  Then yesterday he came out with the following statement:
“American consumers are hurting, at the gas pump, at the grocery store, at their local bank, and it’s our responsibility as regulators to do all we can to the fullest extent of our authorities to ensure that the prices consumers pay are 100 percent fair and accurate"

While this statement may be factually true, it once again mixes two separate issues intended to mislead and deceive.  It mentions that consumers are hurting from high prices and that the "authorities" can do something about IT; IT OF COURSE BEING THE HIGH PRICES WHICH IS NOT THE "AUTHORITIES" JOB TO DO ANYTHING ABOUT. Prices should be set in a FREE MARKET and not manipulated to work in the favor of the powerful interests like the banks who own and run our government.


IN FACT, THE AUTHORITIES AT THE FEDERAL RESERVE ARE CAUSING THESE HIGH PRICES WHICH HURT THE CONSUMER BY CREATING MONEY OUT OF THIN AIR AND CALLING IT QUANTITATIVE EASING.

And so it goes, the Federal Reserve, The Big Banks, The CFTC, Obama and The Congress of The United States all working together to ROB THE AMERICAN PUBLIC and TO ACT LIKE THEY ARE DOING SOMETHING TO HELP, WHEN IN FACT, THEY ARE THE CAUSE.
Posted by News Wire at 5:53 PM