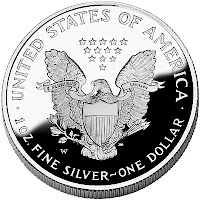 Below is the release from the U.S. Mint confirming the shortage of available silver so meet demand as required by law. The U.S. Mint must produce quantities sufficient to meet public demand and yet is is unable to follow the law due to the Silver Shortage.

Although the demand for precious metal coins remains high, the increase in supply of planchets—coupled with a lower demand for bullion orders in August and September—allowed the United States Mint to meet public demand and shift some capacity to produce numismatic versions of the American Eagle One Ounce Silver Proof Coin.