Question: Is Silver Rarer Than Gold? 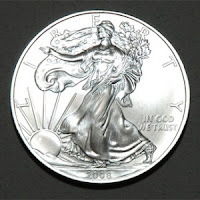 The quick answer is YES.

This puts the ratio of Gold to Silver at approximately 67 or in other words you can get almost 67 ounces of silver for each ounce of gold that you own. Or, put another way, gold is 67 times as expensive as silver.

This would initially make me think wow, gold must be about 67 times as rare as silver. But, pricing isn't done on rarity alone.

How much above ground gold and silver is there?

So with this said, silver is 4 to 5 times more rare than gold. And yet gold is 67 times more expensive than silver.

Historically, silver is found in the earths' crust in a ratio of about 16 ounces of silver to each ounce of gold that is mined. Looking historically at the silver to gold ratio, the ratio is normally much lower than it currently is. So, is silver undervalued? Is Gold overvalued when compared to silver?

Can this really be true? How long can this last? How many people in the world are actually aware of this?
Posted by News Wire at 11:18 AM

Email ThisBlogThis!Share to TwitterShare to FacebookShare to Pinterest
Labels: how much silver is in the world, silver more rare than gold, silver rarer than gold
Newer Post Older Post Home